It’s Been A Long Time

I took this adorable video of the boys painting at the art easel today and just had to share!  Enjoy!

A few things about the video:

Happy Birthday to you, Amanda!! 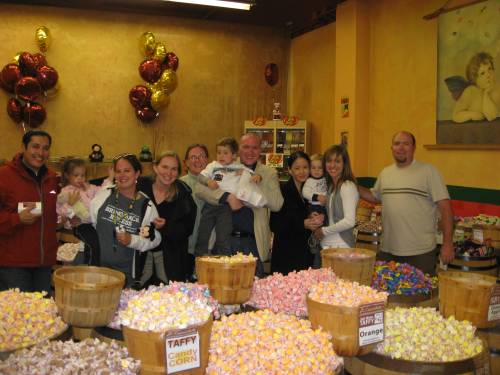 Hope your day is sweet!  We love you!! 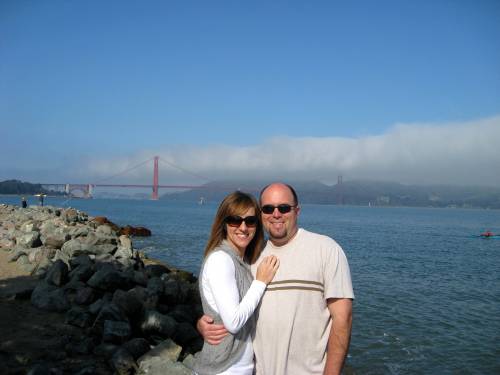 Happy 7 years to the love of my life, Jake!!  In the spirit of Thanksgiving I want you to know how thankful I am for you!!  I love you!!!

I Ain’t Afraid of No Ghost

If there’s something strange in your neighborhood…

Who ya gonna call?  GHOSTBUSTERS!!

I mean, really?  Who could be afraid of these two adorable ghosts!!

“Daddy is the Birthday Boy!!”

Ben has been walking around the house today chanting, “Daddy is the birthday boy!!”  Oh, how we love birthdays at our house…especially Ben!!  Here’s a special birthday message to Jake from two of his biggest fans…Ben and Jude!!

A few things about this video:

Happy Birthday, Jake!!  May this be your best year ever!!  We can’t wait to continue your birthday celebration with the rest of your family in San Francisco this weekend!!!  We love you!!

Standing on the big stage in our sanctuary at church while peering out at the faces of some extremely proud parents must seem a little intimidating for a three-year old.  For this particular event in May, Jude stayed at home with our babysitter while Jake and I spent a special evening with Ben at the end of year program for his 2’s preschool class!  Dressed in his required red shirt, we dropped Ben off at his classroom so that he could prep for the show!  Ben seemed a little nervous and after giving him a quick kiss on the forehead, we assured him that we’d wave really really big from our seats to make sure he could see us.

We made our way into the sanctuary only to find that it was already quite crowded.  We did find what we thought were decent seats in the middle section about midway back.  My plan was to walk up close enough to get Ben’s attention when he walked out on the stage and then head back to my seat.  However, right before the ceremony began we were asked to remain in our seats.  Bummer.  Every part of me wanted to get up anyway.  Afterall, I had told Ben I’d make sure he could find us in the crowd.  But I also didn’t want to be “that parent”.  And I certainly didn’t want to break the rules.  So as hard as we tried…we waved and called out Ben’s name…we could not get his attention.  I could tell he was searching for us the entire time he was on stage.  Thankfully, the show did go on and he did great!!! 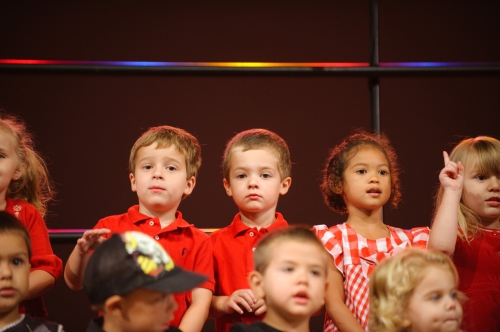 Ben’s musical debut included two tunes…Jesus Loves Me and Jesus Loves the Little Children.  After the last song was sung Ben exited stage right where I finally got to meet up with him!!  The first words out of his mouth were, “Mommy, where were you?!?”  When we arrived back at our seats where Jake was waiting, all seemed well in the world again!! 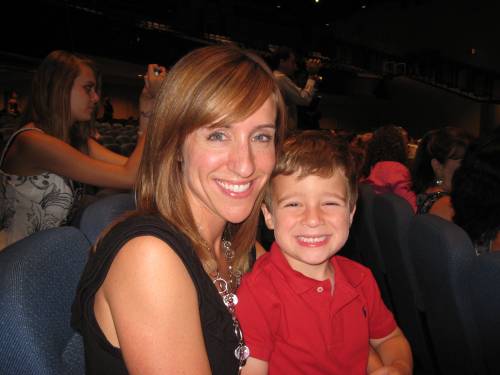 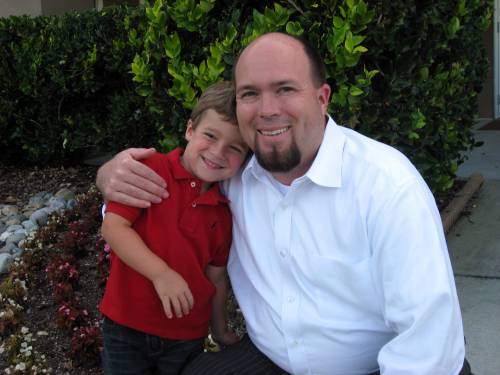 We wanted to end the night with a special dinner of Ben’s choice…McDonald’s!

I just had to add one last picture.  Toward the end of the school year we celebrated Teacher Appreciation Week.  There was a theme for each day of the week and on one particular day each child was supposed to write a note to his/her teacher about what makes her so great!  I interviewed Ben and loved his response for Ms. Hale, his home room teacher.  “Ms. Hale is a great teacher because God made her!”  Heart melting. 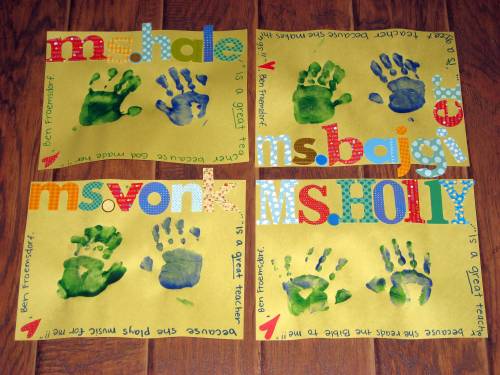 [The first three photos in this post are courtesy of Mike & Ann Visual Storytellers.  Thank you!!] 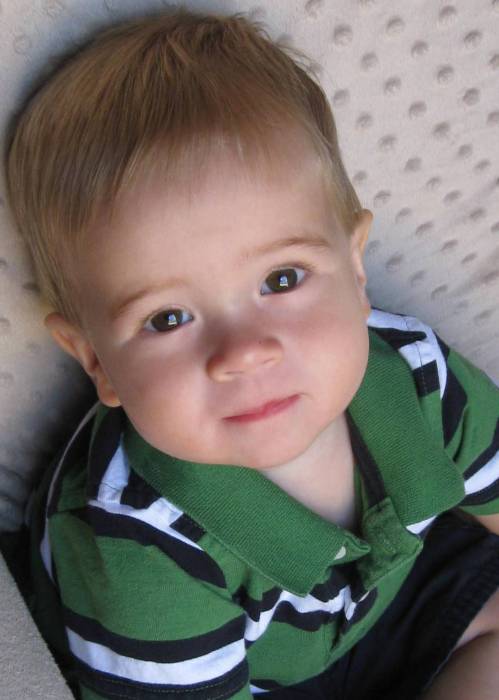 Jude turned 13 months old on May 5th!  Here are a few memorable moments…

Jude hearts forks and spoons.  I know it sounds kind of silly to even mention it, but Jude feeds himself amazingly well with a fork and spoon for his age.  Maybe it is so shocking to me because Ben is the polar opposite when it comes to using utensils while he eats.  He believes his hands work just fine to eat just about everything!  We are constantly reminding him, “Please use your fork and spoon.”  We began introducing solid foods to Jude when he turned six months old, and it seems like right from the beginning he always wanted to feed himself.  In this post I even referred to him as a “two spoon kind of guy” because he loved spoons so much…we couldn’t get him to eat unless he was holding one too!  And at 13 months he has mastered the use of his fork and spoon better than, well, some three-year olds.  He typically won’t even begin eating until he has the appropriate utensil in hand.  The strangest thing I’ve seen him eat with a fork?  A cheese puff!

Sneaky Baby / #1 and #3.  Before Jude began to crawl he could only sit and longingly gaze upon Ben’s toys from a distance.  But, oh how things have changed now that he can motor his little self on over to those toys!  Lots of big brother’s toys lined up in a nice and tidy row + 1 swipe from little brother’s tiny hand = Major meltdown mode for big brother!  And as the swiping continued on a frequent basis, Ben dubbed baby Jude the “Sneaky Baby.”  Not long after Jude received said nickname I started finding things like this around the house.  (Yes, that is Ben’s tractor and trailer hanging from our bedroom doorknob.) 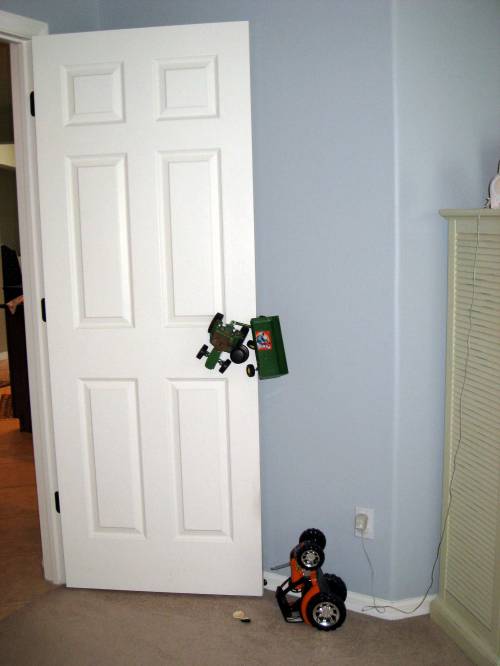 When I asked Ben what he was doing he replied, “Don’t touch it Mommy, I’m making sure the Sneaky Baby doesn’t get my toys!”  Of course Sneaky Baby does continue to swipe Ben’s toys from time to time and when Ben starts to go into meltdown mode I like to remind him that Jude is one and he is three and that they are both going to have to learn how to share.  So what does Ben think about all of that?  Well, he dubbed Jude with a new name, #1, and he calls himself #3!

I love these playful photos of Jude!  He does look a bit mischievous and a little “sneaky” after all, doesn’t he!! 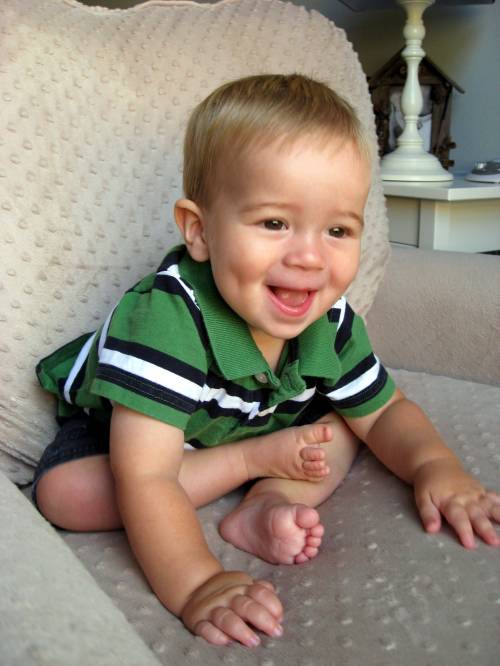 Jake and Joanna
Create a free website or blog at WordPress.com.