I know I am a little late, but I wanted to send a big birthday wish to my friend Jay!  He celebrated a birthday last week (on the 26th)!!!  Jay and I met in grad school at the U of A and both ended up transferring to UALR to complete our masters degrees in Health Services Administration.  We endured classes four nights a week, numerous projects and presentations and multiple “Meet the Administrator” luncheons together.  We also worked together as Graduate Assistants and later we both went to work at the VA in Human Resources.  We miss him and his adorable family lots.   Happy Birthday, Jay! 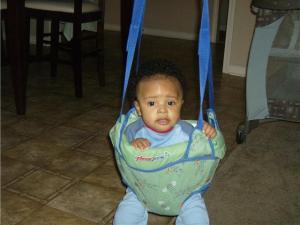 Yes, that’s right!!  One day after Ben turned seven months old he said, “Da da!”  I have been telling Jake for about the past week that I’ve noticed Ben has added the sound “Ba” and “Ab-Ba” to his “conversations” with me.  I also told him that I thought I heard him say “Da” a few times but wasn’t for sure.  On Saturday we grabbed a bite to eat at the Atlanta Bread Co. before leaving Columbia and while we were sitting there Ben said, “Da da.”  We were both so excited, I’m sure the nice patrons sitting around us thought we were a little loco.  Since that time, I’ve heard him singing “da da da da da” in a cute little whisper!!

Since we were away from home we didn’t have our fuzzy wuzzy dot chair to take our monthly picture in.  So, we opted for this cute shot while lounging by the indoor pool.  I think he looks so big and grown up in this picture!

The introduction of solid foods is going really well!  He definitely prefers oatmeal over rice cereal, but other than that he doesn’t seem to be a very picky eater…he seems to enjoy both vegetables and fruits alike!  Also, he has grown quite attached to his stuffed animal giraffe that plays a lullaby when you stretch out his neck.

As I mentioned in the update last month, Ben really enjoys the sound of crinkling paper.  We had a stack of newspapers on the table at the hotel and while I was making his dinner one night he started going through them.  He would pick up the newspaper on top of the stack, open it, crinkle it, throw it down and then move on to the next one in the stack.

Last but certainly not least, he is still hard at work trying to learn to crawl. 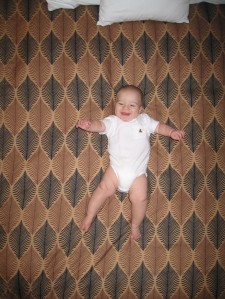 Okay, so staying for a week in a hotel with a seven month old proved to be a greater challenge than I expected.  I guess as an adult you don’t notice the banging of the heavy hotel doors or the continuous conversations out in the hallway as much as a baby who is trying to get some sleep.  On Wednesday night we purchased a box fan and by Thursday he was sleeping peacefully through the night again!!

We were pleasantly surprised that Ben did AWESOME on the drive to/from Columbia.  It took us seven hours and forty-five minutes including three pit stops for gas, food and potty breaks.  It was only about the last 45 minutes on the way there that he started to get kind of cranky.  Thankfully we had the tambourine in tow and it worked wonders!  Click here to watch the tambourine boy.  I also remembered to pack one of Ben’s CDs with Old MacDonald on it.  I believe this is his new favorite song…we played it on repeat for those entire 45 minutes!!

Things went really well for Jake at the school.  He had a good crew working for him and they got lots accomplished.  Ben and I had fun eating lunch with him on a couple occasions and checking out the progress at the campus!

Ben and I spent most of our time playing in the indoor pool at the hotel.  He had lots of fun kicking his legs like a little froggie and splashing his hands in the water.  He also enjoyed sailing around the pool in his yellow floatie boat.  My legs have actually been sore this week from running up and down in the shallow end with him.  In the evenings Jake and I would get in the hot tub and let Ben dangle his feet in the warm water.  I am pretty sure he thought it was a new version of bath time with really cool jets! 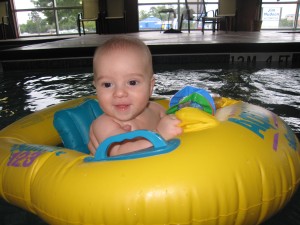 We also spent some time roaming around the city.  On Thursday I took Ben to EdVenture Children’s Museum. 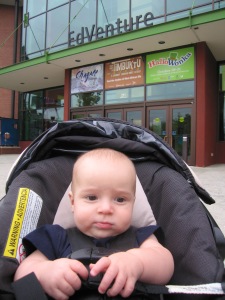 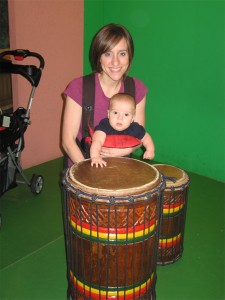 He had a blast!  He loved beating on the drums at the “Timbuktu” West Africa exhibit and composing his own music at the “Sounds Good” music studio.  We also spent some time playing on this cool ship!

After about two hours it was time to go.  Ben was asleep before I pulled out of the museum parking lot and went on to take a nice two hour nap back at the hotel.

Here are a few highlights of the funny comments we heard about Ben from strangers during our visit to Columbia:

Stranger 3:  Ben and I were checking out at a store and this little girl came riding up on her momma’s shopping cart.  Ben had been a little cranky but when he saw this little girl he started smiling and squealing with delight.  The little girl turned to her mom and said, “Momma, he sure is happy to see me!”  She was very cute!

Stranger 4:  “Myyyyy, what a sweeeeeet baybee!”  (Picture in your mind a little lady with a pretty hat on her head and a very strong southern accent.)  The people in SC were SO friendly!!

We are leaving tomorrow morning for our first family road trip to Columbia, SC.  Jake is actually going there for work and Ben and I are tagging along.  Remington College is opening a new campus there and Jake is responsible for coordinating all of the efforts going on inside the building to prepare it for opening day!  Ben and I plan to play in the pool at the hotel and to visit some area attractions.   We’ll make sure to tell you all about our trip when we return home next Saturday!  Here’s one of my favorite James Taylor tunes for you to listen to while we are gone (okay, so the video is a little cheesy…I was having trouble finding a clip of this song)!  Enjoy!

P.S.  Many of you know that I had my second kidney stone procedure this week (on Thursday) to blast the stone in my left kidney.  This procedure seemed to be a bit rougher on my body than last time.  Basically for the entire afternoon after the surgery I laid around feeling pretty puke-ish.  Thankfully by the evening the nausea had subsided and I was able to get some sleep.  When the nurse from the hospital called yesterday morning to check on me I related to her that my back was still pretty swollen and I was feeling a lot of pain.  She replied, “Well, it is like you received about 2,000 kicks to your back…you’ll probably have some pain for a while!”  So for now it looks like I’ll continue my meds to help ease the pain of the bruising and lump on my back.  Thanks to all of you for your prayers, calls and e-mails!

Ben attended a birthday party for the very first time today!  His little buddy, Isaac, from playgroup turned one year old!  At eleven o’clock we headed to the big pool to celebrate with everyone.  Ben was not very excited to see the big pool today.  I’m not sure if he was a little tired (he chose to play in his crib instead of nap in it this morning…he must have been excited about the party) or if all of the kids that were splashing and playing scared him.  So we opted to hang out under the covered patio with some of our other buddies from playgroup.  He was super happy when Jake arrived a little while later!  We ate yummy sandwiches and tasty cupcakes!  Here are a few shots taken during the festivities! 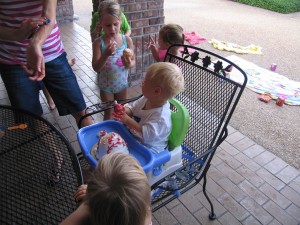 We set up the jumper for Ben last weekend.  As you can see in the video…he LOVED it!!  We were laughing so much while watching him.  He is great entertainment!  Watch out Lord of the Dance…here comes Ben!!!

I love this next clip of Ben in his rocking chair.  I often sit him there right before bedtime and give him a book to play with while I get the crib ready.  On this particular night he started chatting up a storm so I had to run and get the camera.  As you will see in the clip he loves it when I talk about his “piggies.”  It doesn’t matter if I actually touch his toes or not, he gets a big grin on his face and begins to squeal as soon as I say, “This little piggy went to the market…”!

This last clip shows Dakota giving Ben sweet kisses.  Dakota is much more interested in licking Ben’s face and hands ALL THE TIME now that he has started eating solid foods.  It doesn’t matter if Ben has just eaten or not, Dakota is always looking for leftovers!

I Think I Can…

For the past week or so Ben has been trying to crawl.  This typically involves smushing his face into the ground while attempting to push off with both legs.  While striving to reach for the toy in front of him he often pushes himself backward.  Needless to say, tummy time has turned into a bit of frustration time for him lately.  We just make sure to cheer him on as much as possible and give him lots of hugs when the frustration is just too much!  Here’s a clip of him hard at work:

We also attended our first Mother Goose on the Loose at our local library this week!  I expected to sit and watch a sweet little librarian read Mother Goose nursery rhymes or at the most watch a puppet read them to us.  I was pleasantly surprised when we not only got to see puppets, but we also got to march in a circle, beat on a tambourine, jingle hand bells, wave pieces of cloth in the air and recite all kinds of nursery rhymes.  I have to admit I did feel a little like Milli Vanilli at times because I was sort of lip-synching some of the nursery rhymes…I’ll definitely need to brush up on these a bit before we return!  I’m sure I had that dumbfounded look on my face when the enthusiastic leader lady asked us to recite the nursery rhymes out loud while bouncing our kids on our legs AND doing hand motions all at the same time!  Whew…it was quite the workout, but loads of fun for Ben!   We can’t wait to go back!

Jake and Joanna
Create a free website or blog at WordPress.com.