A couple of days after my birthday I started feeling bad.  Our family had just finished up a weekend packed full of fun and festivities with my brother’s family (they completely surprised me by showing up on our doorstep the day before my birthday…a blog coming soon about that)!  I was feeling completely worn out, exhausted and a little nauseated.  My husband can tell you, anytime I am super tired, I get super nauseated.  So, I didn’t think too much of it except that as the day went on, the nausea lingered on.  By 7:00 pm that evening, I was in bed with a bottle of Gatorade I had dug out of the refrigerator along with a half eaten package of saltine crackers.  Jake was getting Ben ready for bed and I’d just finished feeding Jude and putting him to bed.  At 9:30 pm it was all I could do to stumble over to Jude’s room to feed him one last time for the night and get him back in his crib.  Finally, I was back in my bed drinking more Gatorade and eating more crackers convinced that if I could just continue eating and drinking these two things that I’d feel better soon.  Apparently, all the Gatorade and crackers in the world couldn’t make me feel better that night.

That’s when my week-long battle with “the bug” began.  All kinds of thoughts ran through my mind as I puked and puked and puked some more.  Was I pregnant (and for all of you that can’t wait to find out the answer to that question…we would later find out from the ER doc, “No, definitely not.”)?  Was I stricken with cancer (my mom had similar symptoms when she was diagnosed with pancreatic cancer…vomiting, diarrhea, terrible stomach pain)?  Was it kidney stones AGAIN?

Two days into my battle, Jake watched the boys while I drove over to see my general practitioner.  After checking my vitals and poking around on me she diagnosed me with a “GI bug,” gave me a prescription for Zofran and told me to drink plenty of fluids.  Two days after that visit I was back again, this time feeling like I could possibly die.  After my blood pressure reading was 76/56 my exam room got very busy…the nurse, nurse practitioner and doctor all began buzzing around me.  I was told that I was “orthostatic” (most likely caused from dehydration) and because they could not administer an IV to me in their office they were sending me to the emergency room.

Jake loaded up the boys and we drove to the ER.  Thankfully, my stepmom, Linda, was already on an airplane to come and help out.  We’d made a middle of the night phone call to my dad (I know, I hate making those calls in the middle of the night…they are always so frightening for the person receiving them) informing him that we’d take Linda up on her offer to come and help out.  Jake had been amazing by taking care of me and the boys for several days, but with all kinds of things piling up on his desk at work he needed to get back there as soon as possible.  After receiving the call at 1:00 am, Linda got up and packed before she and my dad left for the airport shortly thereafter.  I know she was exhausted only to come and be more exhausted by taking care of me and the boys.  We appreciate you, Linda, more than we can express in words!

Until my recent visit, I can’t tell you the last time I was in the ER as a patient.  My most vivid ER memory was in 7th grade after a car accident.  Anyway, I’ll admit I was feeling a little scared as I walked in that ER all by myself.  The security guard searched my bags and scanned her wand over me then pointed in the direction of a glass window saying, “Wait at the line, please.”  Just as I was starting to feel like I was going to pass out I heard,  “Next.”  After taking my name and a brief history the nurse asked me to sit in the waiting room until my turn.  Thankfully, my turn came quickly.  Finally, I was back in a room sporting the ever so stylish hospital gown and not long after that I met with the ER doc to discuss my situation.  The plan: administer fluids intravenously along with another dose of  Zofran.  After not one, not two, not three but YES, four sticks…the IV was in.  “I guess you’ve been throwing up more than we thought.” The nurse said as she finally started the IV.  All of that sticking REALLY made me want to pass out.  I was thankful to be left alone with my big bag of IV fluid and a TV, even if all but two channels came in fuzzy.

Jake picked up Linda at the airport, dropped her and the boys off at the house and arrived at the ER just as the first bag of fluids was finishing up.  It was such a relief to have him there.  I was feeling a little frazzled especially after listening to the lady next door screaming, “I want pain meds NOW!”

While waiting for the doc to come back to visit with us again, Jake took a little jog back down memory lane to the most recent time he could remember being in the ER.  When he was in college working at a restaurant (Kirby’s…where we would eventually meet, and the rest is history), he made a trip to the ER after burning his hand in some hot oil.  Once he arrived in an exam room all he could remember hearing was the woman in the next exam room screaming, “I haven’t had a bowel movement in 12 days…it hurts!”  What is it about poop that makes us all laugh?  Jake and I must have hee hawed over his story for at least 30 minutes before the doc arrived to discharge me.  I’m convinced that laughter is the best medicine!

When I returned home this was my conversation with sweet Ben:

Over the next several days I began to feel better, regain my strength and began to eat solid foods again.  Unfortunately, Ben ended up running a 102 fever for a couple of days and complaining of his mouth hurting anytime he’d try to eat anything.  Linda just happened to mention at dinner one night to check his throat.  Sure enough, it was the worst looking throat I think I’ve ever seen.  After a visit to the pediatrician (dubbed the “train doctor” because of the electric train that goes around and around on a track high above our heads in the waiting room) Ben received the diagnosis of Pharyngitis.  After several days the sores on the back of his throat disappeared and he began to feel better.  He proudly told us one morning, “I feel better, my throat went away!  Now I can kiss baby Jude.  Hip Hip Hooray!”

“To Infinity and Beyond”

As I’m writing this post, the boys (and the dog) are napping.  All I can hear is the hum of their monitors.  This is my special treat…quiet time!!  Since Jude’s birth it seems like every waking moment is filled with one or the other and in most cases both boys needing my attention.  I’m sitting at the breakfast table working on the laptop.  And I just realized that I’m not alone.  I have Buzz Lightyear to keep me company.  Buzz was our distinguished guest at lunch this afternoon and it just so happens that Ben left him sitting on top of the table.  How appropriate since this is the post I’m working on…

A week or so after Toy Story 3 opened in the theaters we took Ben to see it (the 3-D version).  It was Ben’s first movie theater experience and it went better than expected.  Well, I’m not really sure what I expected.  I wondered if he might be scared of the dark theater, if he might not wear the 3-D glasses, if he’d talk through the entire movie or if he’d want to get up and run around.  But, it went great!  We took him to a matinée after his nap.  We purchased our tickets at the window (I even had a free ticket!!) and made our way up to the concession stand where we made our selections of popcorn and Sprite (I made sure to pack some sweet treats from home in my bag, but movie theater popcorn is a must!!).  Next, we let Ben hand the nice gentleman our tickets as we caravaned down the hallway and into the theater.  We made our way all the way up to the second to last row from the top and plopped down into the cushy seats.

Ben loved everything about going to the movie!  He chowed down on the popcorn and slurped up the Sprite with great delight.  When the movie started and the lights were turned off he wanted to sit on Jake’s lap, then my lap, then Jake’s lap…you get the idea.  We also let him stand up a few times in front of us to stretch his legs and shake the ants out.  =)  And really the only talking he did was when they introduced the wind-up cimbal-playing monkey toy.  The monkey surveys the security monitors at the Sunnyside Daycare Center and he is a teensy bit scary.  So from the time the monkey was introduced until he was wrapped in tape and placed in a drawer, Ben repeatedly asked, “Is the monkey coming, Daddy?”  Jake and I were both thankful when they finally stuck him in the drawer!

Oh, and did I mention we took Jude with us too!  Never would I have ever thought about taking Ben to a movie at Jude’s age, but I wasn’t about to miss Ben’s first movie experience.  Jude was a trooper.  He woke up sometime during the movie, I fed him, he watched the big screen for a little bit before his eyes grew heavy once more and he drifted off back to sleep in my arms.  I moved him back to his car seat and he stayed asleep until the end of the movie.  I did notice after we arrived home and I took him out of his car seat that he had some popcorn on him.  Thankfully, he didn’t seem to mind. 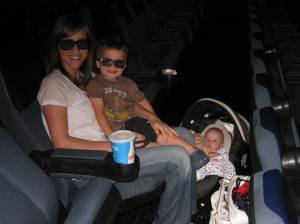 Now that he’s seen the Toy Story movies Ben likes to run around the house and pretend he is Buzz Lightyear.  He’s started jumping off the couch, train table, stools, etc…pretty much any surface he can find that is off the ground…I even caught him standing on top of the arms of his high chair!!   When he jumps he yells out, “To infinity and beyond!”

We were in the playroom one afternoon and Ben was standing on his red chair swinging his arms up in the air over and over again while jumping.  All of a sudden he burst into tears.  This was our conversation:

Me:  It’s okay, you can jump off your chair…I’m right here.

Ben:  No, Mommy, I want to fly.  As he continues to jump up while swinging his arms

Me:  Maybe we could fly on an airplane soon.  Would you like that?

Ben:  Yes.  Said with a slight quiver in his voice  (I love this boy’s determination!)

Other Toy Story quotes I’ve overheard him saying or singing:

“Andy…”  He has conversations with Andy (yes, cartoon Andy) while they play together.

He sings, “You’ve got a friend in me.”  The theme song from the Toy Story movies.

We love you and look forward to seeing you in a few weeks!!

A Birthday Message to Uncle Matt

(The first video cut off before I could finish taping because the card was full.  After Ben put the crumpled piece of paper on Jude’s head he said, “Jude’s wearing a party hat!”)