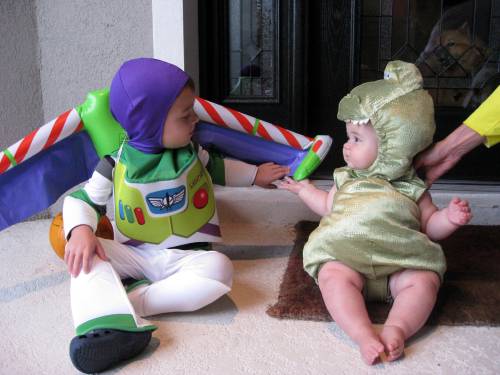 We were trying to get a shot of the boys together on Halloween.  It proved to be difficult, as expected, with an independent 2 1/2 year old and a curious 6 month old.  Rex was very fond of Buzz’s wings, Buzz was less than thrilled.  I’m pretty sure Buzz longed for a real laser to zap the troublesome Rex.

In the end, Buzz wasn’t going to let adorable little ole Rex spoil his fun.  He was space ranger Buzz Lightyear after all, and it was Halloween.  He had a mission…secure as much candy as possible and return to base camp!  Mission accomplished!

A funny little side note:  Not long after the trick or treating began, Woody became like a meet-and-greet character from a Disney theme park.  Seriously, Jake (a.k.a. Woody) had countless numbers of parents stop and ask to have their children photographed with him. “Woody is my child’s favorite character, can he/she take a picture with you?” was a question we heard a lot that night!

One response to “Buzz and Rex”